4/6 – The death of the positive Robert Schuller

He was one of the biggest televangelists of all time, preaching faith and redemption with upbeat enthusiasm from his landmark Crystal Cathedral in Southern California. The Rev. Robert H. Schuller died last week at the age of 88, leaving a legacy that is sadly mixed and muddled as the world saw both his church and viewership collapse, which ultimately forced the ministry to file for bankruptcy. 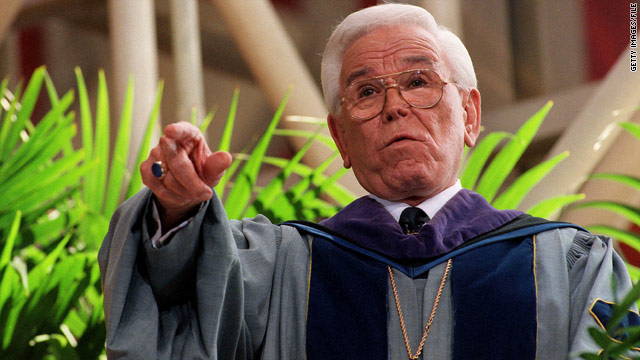 If there ever was a #9 FCAR “Pied Piper,” it was indeed Mr. Schuller, who always preached in a flowing purple robe and over-sized “aviator glasses.” He preached positively, saying from the pulpit after a mild heart attack in 1997 that “the positive person” is not afraid of life’s surprises. He also wrote, “Self-Esteem: The New Reformation,” in which he detailed that “the classical error of historical Christianity is that we have never started with the value of the person.”  Critics said he went too far, denying the need for personal repentance of sin. His friendship with former President Bill Clinton (#15 FCIL) also caused alarm amongst conservative Republicans of his Orange County congregation. “I do let people know how great their sins and miseries are,” he said in an interview. “I don’t do that by standing in a pulpit and telling them they’re sinners. …The way I do it is ask questions. Are you happy? Do you have problems, what are they? So then I come across as somebody who cares about them.”

Things went south in in 2006 after Schuller’s only son, Robert, was installed as senior pastor. He ended up leaving in 2008 amid a bitter family feud. In 2012, Schuller and his wife quit the board of directors in a “dispute over copyright infringement and breach of contract. That same year, they lost a legal bid to recover more than $5 million from their former ministry.”

Remember the #9‘s official nickname? Yes, the “Motivator,” and they typically do so with utmost fervency and enthusiasm, avoiding disharmony (often at a cost), and initiating new ideas and projects while discovering new possibilities. In an article written a few months back we detailed the life of our good friend Vic Braden who was never short on energy or new ideas. Schuller was of the same makeup. “He was a young guy like me, and he was going out there and trying new things,” said his grandson, Bobby Schuller, who pastors his own church that includes some of his grandfather’s former congregants. “He did so many amazing, innovative things.”