The #10 BCAR is more apt to think first, speak later, than the #1 FEAR. Of course, of all the 16 genetic, inborn Brain Types, the #1 is, well, number 1 on the list for speaking first, thinking later, due to their Front brain, Right brain dominance, as well as their Empirical (here-and-now), Animate (emotions, feelings) nature. So, when Jordan Clarkson (#10) of the Los Angeles Lakers made headlines for whispering, “Don’t say anything crazy” to D’Angelo Russell (#1) during a press conference last week, it provided, once again, a perfect scene of Brain Types in action for everyone to watch and appreciate. 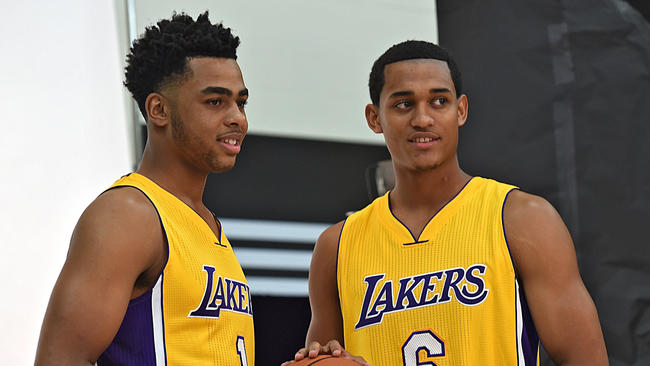 The microphone picked up Clarkson’s comment, and the clip went viral. As a result, Clarkson was forced to say something about it, and later told reporters, “They were asking some crazy questions when we were up there, and I just didn’t want him to get put in a situation where he was looked at as a problem or something, We ain’t got no problems here. I didn’t think they were going to catch me saying it.”

Not surprisingly, Russell didn’t even hear Clarkson when he said it. “I didn’t know he said that until I saw it blow up a little bit on SportsCenter. So I didn’t notice.”

The whole ordeal revolves around coach Byron Scott (#6 BEIR), who has butted heads a number of times this season with the feisty Russell. He went on to say, “I think Jordan was doing a good job giving him some good advice. He was trying to make sure he understood to be careful what you say.”