“Cam Newton should have his MVP rescinded. The way he didn’t go for that last fumble and now his post-game attitude?!?”

“Another reason why I don’t like Cam Newton. A couple years ago when Manning got blown out by Seattle he didn’t walk off the stage and pout like Cam. Completely Classless.”

These comments from fans are just a few among hundreds regarding Newton’s behavior after losing last night’s game. Says one source, “It couldn’t have been easy for Cam to face the press after the Panthers lost to the Broncos in Super Bowl 50. But Cam didn’t want to talk at all. The quarterback looked beyond furious during the press conference. After being asked about the ‘tough’ loss, Cam huff he was ‘done’ and abruptly walked away from his seat.”

Yes, the Panthers lost to the Broncos 10 to 24, wherein Cam “didn’t play his best game.”  He he was 18-of-41 for 265 yards with an interception and six sacks, and as USA TODAY writes, “Newton was understandably frustrated by the loss, a game in which he never got into a rhythm and was continually stymied by the Broncos defense, which was led by Super Bowl MVP Von Miller.”  Yes, Cam never got into a rhythm, and as we wrote in our last article, that very real possibility was on the table due to his inborn Brain Type. 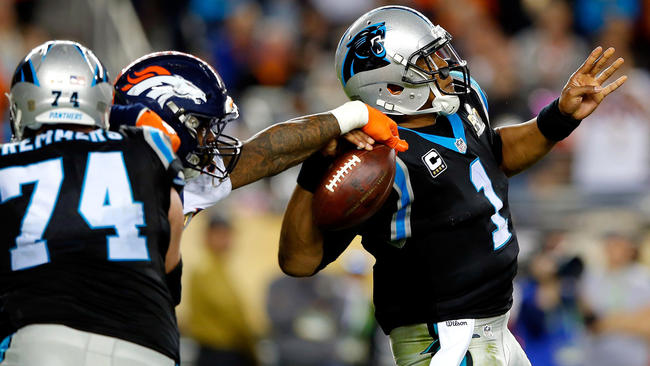 What do we mean? We can’t help but think back on Rich Ganon (#13 FCIR) vs. Brad Johnson (#6 BEIR) in Super Bowl 37 with the Oakland Raiders against the Tampa Bay Buccaneers. That year, Ganon had won MVP, having come off of an exceptional season. On that frightful day, however, he threw a Super Bowl record five interceptions, three of which were returned for touchdowns, and his team suffered a humiliating loss despite being highly favored. The pressure got to him, and the pressure certainly got to Newton as well. (By the way, the week before SB 37, Brain Doctor Jon Niednagel did an interview where he uncannily predicted both Gannon’s and Johnson’s performances opposite the so-called experts.  Once again, inborn BT proved true to form, and science.)

Granted, the Denver defense was exceptional, and kept Newton on his toes. Therein lies the problem, however. When pressure is greatest, true grit and talent is revealed, as well as one’s inborn design. What really has the sports world abuzz was Cam’s decision not to dive for the football after he was stripped by Von Miller (#1 FEAR). Check out both YouTube links below.

Why didn’t he dive?

Cam clearly had a chance to recover the football, but at the last moment he bailed out for reasons only he knows (and BT students). The play is actually so embarrassing that it’s being used for fodder by conspiracy theorists to ‘prove’ the game was fixed! Yikes! We sure hope not, Cam! At any rate, Denver cornerback Aqib Talib (#13 FCIR simply stated afterwards, “He didn’t want it.”  Others speculate that he just “froze.”  In the end, it was frazzled #13 nerves primarily, and secondarily, not wanting to get hurt.

For those unfamiliar with each Brain Type’s manner when succumbing to severe pressure, the #13 FCIR‘s strongest cerebral function, visual abstraction (C), overcomes the whole brain. Other normally reliable capacities suffer, especially the #13′s weakest trait Empirical sensing’ stimuli (grasping what is in the moment). Instead, FCIRs enter a fog failing to see and grasp Empirical reality. Thus they become paralyzed to process and act on such in-the-moment matters.

It’s unfortunate that Cam Newton had to display such a pity party after the loss. Newton is a talented #13 quarterback, ala Colin Kaepernick or even (the more skillful) Aaron Rogers. He is certainly no bust, and could have played very well (as have other #13s in the past) had he been able to stay loose by knowing and controlling his BT, for starters.