4/11 – Historic loss for Jordan Spieth at the Masters

The Masters was tough to watch yesterday for leader Jordan Spieth (#13 FCIR). He was set to win his second consecutive green jacket and join the likes of Jack Nicklaus (#8 BEIL), Nick Faldo (#7 FEIL), and Tiger Woods (#10 BCAR) to do so. Instead, the wheels came off on the 12th hole, and he lost his lead after a quadruple-bogey 7 on the par-3. Spieth’s first shot landed in the water, and taking a drop from 70 yards out (instead of choosing to chip from below the green), his next shot landed in the water again. Taking another drop, Jordan’s shot landed in the bunker behind the green, where after he was able to get out and in for his 7. It was surreal, and paved the way for Englishman Danny Willett (#13 FCIR) to win the tournament instead. 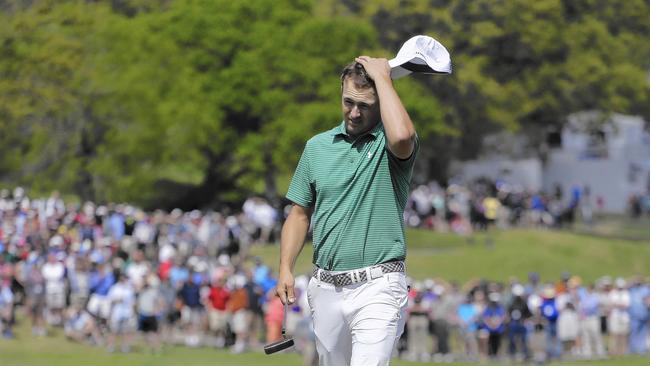 It was really a very tough 30 minutes for me that hopefully I never experience again, said Spieth. “I didn’t take that extra deep breath and really focus on my line on 12. Instead, I went up and I just put a quick swing on it. The dominant Conceptual Spieth then added, Big picture, this one will hurt. It will take a while.

Every Brain Type chokes, for sure, yet some more than others. For the #13 FCIR, under the biggest pressure, their pliable motor-skills have the potential to break down. Also, with more typical neural activity, they can too often over-synthesize and over-strategize the game of golf. There’s no doubt Spieth’s brain was firing on all cylinders as he considered his 5 shot lead, and after his first shot went into the water on the 12th, his brain caught fire. It is at this crucial time that #13s need to be reminded to relax and keep a smooth tempo, as they tend to swing too fast. As Jordan himself said, he didn’t pause to take that “extra breath”, but put a “quick swing on it”. (Don’t forget, when each BT succumbs to pressure, it essentially localizes in its dominant region and cerebral function. For the #13 BT, this is Q1 and spatial abstraction not conducive to an in-the-moment, focused, and easy golf swing.)

And round and round the #13 FCIR winning-wheel goes, as a #13 loses at the last moment and another #13 takes the championship. Willet the Brit, however, was able to stay calm and collected with little pressure. He began the day 4 shots behind Jordan and had nothing but warm vibes as he cherished his final round amongst the azaleas and warm southern breezes.

Yes, we were hopeful to see some consistency develop in the likes of Mr. Spieth, but like so many other FCIRs who have come and gone before him, it wasn’t meant to be this time.