It was the kick heard ’round the world, or rather seen around the world. We have the video posted below for your critiquing eye, and whether it was done on purpose or not you can decide. What we can tell you is that #1 FEARs are not only your biggest floppers in the NBA, but in all team sports they are the most emotionally volatile and rarely is this a good thing for the opponents immediately in their way. Think of the NFL’s Domican Suh, or the NBA’s Dennis Rodman, Ron Artest, and our #1 poster child today, Draymond Green. With their dominant gross motor muscles, explosive energy, and Animate ‘feeling’ emotion, they can fake the slightest bump to appear like they were hit by an oncoming train, or, take it out on an opponent and literally send him flying as if punched by another #1, Muhammad Ali! 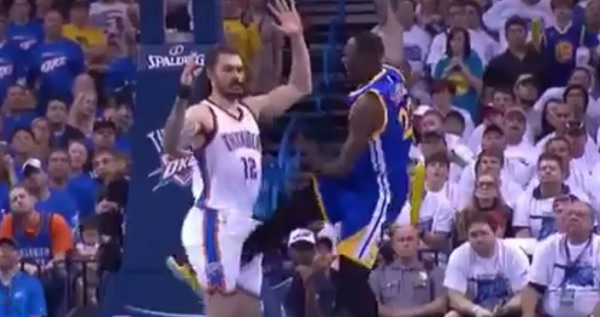 To be a good flopper, you’ve also got to know how to flail your arms and legs, and that’s exactly what Draymond Green did last week against the Oklahoma City Thunder. Going up for a shot, he was fouled by Golden State’s Steven Adams (#13 FCIR), and immediately kicked his leg up between Adam’s legs, hitting you-know-where. Adams was down for the count for a good couple minutes, and the crowd went wild when the replay was shown.

No BT is known more for athletic cheap shots than #1s. We could chronicle pages of these occurrences that have transpired over the years. Yet Green insists he didn’t purposely kick Steven in the groin. If you believe him, you don’t know BTs and sports. What’s more, Draymond has a history of cheap shots in just his few NBA years. (Of course, some #1s have strong ethical values and always treat others with kindness and dignity.) Whatever you believe, he certainly flailed his body, and wasn’t overly concerned with Adam’s physical welfare. In game 5, in fact, Green AGAIN made headlines for flailing his leg, which you see here.

In other news relating to Green, he made a Brain Type related quote about sports analytics and people over-analyzing his game recently. “Professionally, I play completely off of feel. I hear people discussing my game in terms of all these advanced numbers. I have no part of it. Even paying attention to it, from a playing standpoint, would make me robotic and undermine my game. I’m supposed to step back behind the line in real time to avoid taking a bad two.That’s thinking way too much. I don’t get the fascination at all.

Yes, we all know how #1s avoid thinking too much! They are your ultimate “feel” players, which can be good in one sense and detrimental in another (when they lose their cool and have a meltdown). At any rate, the Warriors made an amazing comeback and are now headed to the NBA Finals to go against the supreme #1 FEAR, Lebron James, and his Cleveland Cavaliers.