She won gold in the 400 meter womens final, but it is HOW she won that has everyone talking. The young 22-year old woman dove. Yes, she literally dove across the finish line to win.

Before we continue, it’s time for a BT pop quiz. What Brain Type, of the 16 designs, would be the most prone to throw their bodies forward like this? We grant that anybody has the potential to do something like this in the moment, but in terms of ‘most prone’, which Brain Type would you guess? Yes, likely a ‘dove’, with their big-body gross-motor skills. Yes, and likely one who is Right brain dominant and willing to spontaneously take the risk. So, that leaves us with the #1 FEAR and #2 BEAR. 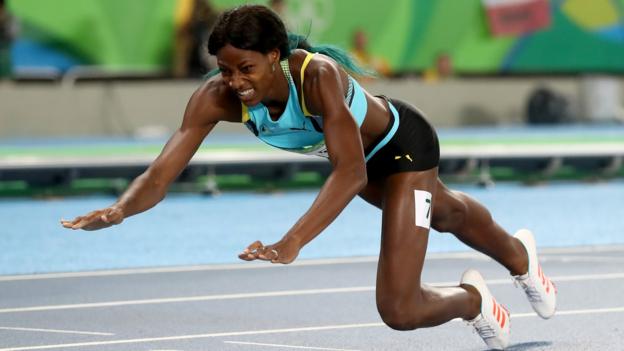 When it comes to wild spontaneity, however, the #1 more commonly trumps the #2. We have written article after article over the years detailing well-known #1s and their unpredictable antics, which can often get them into a bit trouble. This time, however, Shaunae Miller’s“unpredictable antic” won her a gold medal.

And Miller is taking some flack for it, with people joking around all over the Internet. “Greatest gold medal divers in history,” reads one Tweet. “1 Greg Louganis, 2 Shaunae Miller.”  And another, “Shaunae Miller was a little short of vertical, had good height off the board & had little splash.”  Coming to her defense, however, has been Olympic golden-shoe-wearing Michael Johnson (#2 BEAR), who Tweeted, “Shaunae Miller’s dive was to recover from falling. Sprinters know the quickest way across the line is a well timed lean. Trust me on that.”

Shaunae’s dive allowed her to beat the talented Alexus Felix, a #13 FCIR who won the 200-meter title in London four years ago. Felix still claimed her seventh Olympic medal in total with silver to become the most decorated female track and field athlete in history. Still, “I wanted to win,” Felix told reporters. “It’s been a tough year. I didn’t quite do enough.”  And as for Miller? “This is the moment I have been waiting for, I just gave it my all. I am just so happy, so grateful, such emotions I just can’t say. I’ve been going through so much this year. Everyone at home will all be celebrating right now.”  Writes one reporter, “Felix, classically trained by Bobby Kersee, made a textbook lean into the finish line. Miller tried something else. The dive is something no coach would ever teach.”

Shortly after Miller hit the ground, “Felix and Jackson walked back to Miller still on the ground, crying! If you watched along you maybe cried too and helped her up.”

Check out the interview of Miller below to better hone your BT skills. She may remind you of a another well-known female #1 athlete. Does Serena Williams ring a bell?