She won silver in the womens 1500 meter at the Rio Olympics, and determining her Brain Type was admittedly a bit of a challenge. Her persona is calm, quiet, and self-effacing, giving the aura of a #10 BCAR. At the same time, she handles herself with charm, dresses with elegant femininity, and rarely appears overexcited, keeping her emotions in check (at least visibly), which gives the aura of a #11 FCAL. Of course, she is from Ethopia, so the power of nurture comes heavily into play. We are talking about Genzebe Dibaba. 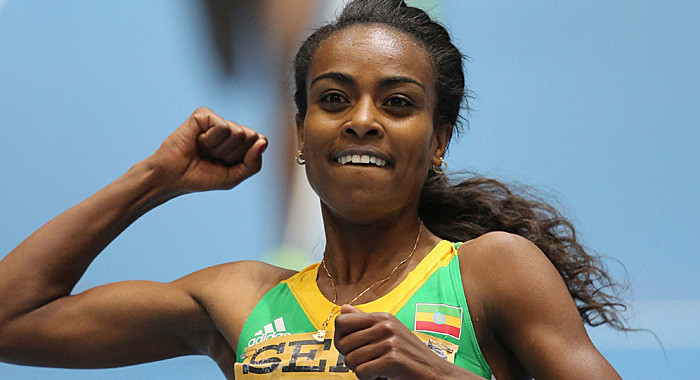 Her resume is impressive. Says Wikipedia, “Dibaba was the 2012 World Indoor Champion for the 1500 m, and is the reigning 2014 World Indoor Champion and World Indoor Record Holder in the 3000 meters. At the 2015 World Championships in Beijing, she became World Champion in 1500 meter as well as claiming the bronze medal in the 5000 m event. She was named Laureus Sportswoman of the Year for the 2014 year alongside male winner counterpart Novak Djokovic and was 2015 IAAF World Athlete of the Year. She is the current world record holder for the 1500 m (both indoor and outdoor), the indoor 3000 m, the indoor 5000 m, the indoor mile, and the indoor two mile.”

Unfortunately, Dibaba’s coach, Jama Aden, was recently arrested but since released and is under investigation on suspicion of supplying banned substances. Says Genzebe, The rumors roaming around the world are deeply affecting me. I have communication with Jama. It’s solely, purely and solely, training and execution and competition. And this (the rumors) adversely affected my performance, my psychology. I’m completely and crystal clean from doping.

Knowing her inborn design, the accusations really could have affected her performance, and her psychology. Dibaba, like Usain Bolt, is a #9 FCAR. Though somewhat soft-spoken, she is bursting with energy, and while the #10 BCAR or #11 FCAL have the ability to be successful runners, it would make an incredible feat for them to become world champions (particularly for the Left brain dominant #11). As dominant Conceptuals, #9s are better able to block out pain than their dominant Animate cousins, which is ideal for long distance running. They have more energy than the #10, and more flexibility, adaptability, and overall athletic ability than the #11. When properly trained (particularly mentally), they are your quintessential ‘shorter distance’ running machines. Long distance races are dominated by the #13 FCIRs who inherit even looser motor movements and greater mastery of the all-important diaphragm which is most necessary for optimal breathing.)

The moral of the story? Keep at it. When someone is difficult to Brain Type, do more research, watch more videos, and make more comparisons to those who may share their same Brain Type. Back in the early years, Jon Niednagel was forced to evaluate people from short interviews he was able to catch on television, or books and magazines he was able to read at the library. Now, it simply takes the click of a button by visiting YouTube or Wikipedia or countless other web sites that can aid your studies. We are “fearfully and wonderfully made,” which means we often don’t fit into the nice little boxes into which the world of psychology wants us to fit. Rather, within the 16 designs, we see incredible and beautiful diversity, as well as stark and undeniable similarities (in mind and body skills), which should cause us all to seek to appreciate and understand one another all the more!

Check out the video below to better acquaint yourself with a low-key #9 FCAR.