MLB fans, and particularly Yankee fans, are thrilled about new rookie sensation Aaron Judge. Just a few days ago, “Judge continued his torrid rookie season with his 25th home run of the season Thursday night. The blast gave the Yankees a 5-1 lead, but it was not enough as they faltered and fell 10-5 to the Angels, their eighth loss in nine games.” Yes, the Yankees are not having their best year, but Judge certainly is. He’s hit 25 home runs in 70 team games, being the second-fastest to 25 home runs in the past eight years. If he stays on pace, Judge will be on track to hit 58 home runs this season, which could “threaten Mark McGwire’s rookie single-season home run record of 49 in 1987.” Not only that, he is one of six players in Yankees history to hit at least 25 home runs through 70 team games, joining Babe Ruth (#13 FCIR), Lou Gehrig (#6 BEIR), Mickey Mantle (#5 FEIR), Roger Maris (#6 BEIR) and Alex Rodriguez (#5 FEIR). 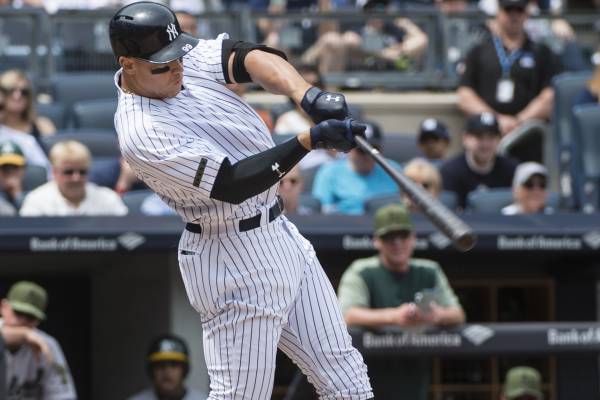 To be sure, Mr. Judge gave us a few different looks that initially made us hesitant to confirm his inborn design. Yet, after careful analysis, we are here to tell you that Aaron is indeed a #13 FCIR. At first glance, he somewhat appears #1 FEAR in nature, but his motor skills clearly give him away. As a right-handed batter, he has developed some excellent batting techniques and movements for his #13 design, enabling him to be as solid as he is. Judge has worked hard on his swing mechanics, and uses the gross motors rather well (most FCIRs who have excelled at the plate have batted from the left side, enabling them to better utilize the gross motor muscles).

Some are saying Aaron is a comer and goer, a rookie who shines shortly but won’t last in the long run. To be sure, there are many #13s who have followed this unfortuante path in baseball, yet there are also those who have left a lasting legacy at the plate (Babe Ruth, Ichiro Suzuki, Todd Helton, Mike Trout). Though few #13 righties have excelled at the plate, Mr. Trout has turned heads lately; of course, it doesn’t hurt that he’s also a freak athlete.

The #13 has certainly made his name famous on the mound more than the batters box, but if Judge can continue to play within himself, hitting to the opposite field when slumping and thereby utilizing the gross motors above his dominant fine motors, he certainly has the potential to find success for years to come.