It was another weekend of elimination in the NFL, as the New England Patriots and Atlanta Falcons are on their way to the Super Bowl after each defeating their respective opponents, the Pittsburgh Steelers and the Green Bay Packers. 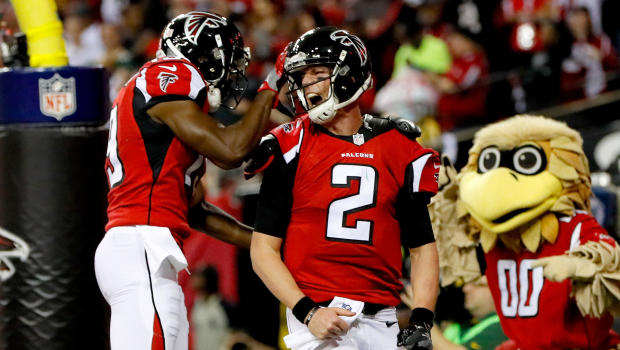 Quarterback Matt Ryan (#13 FCIR) of the Falcons had a stellar game, throwing for 392 yards and four touchdowns while running for another fifth. “We just kept battling the entire four quarters,” said Ryan. “You never know how these (games) are going to shake out, you expect to come down to the last play or two … I’m just really excited about two weeks from now.” And how about that Julio Jones? A #1 FEAR, the all-pro receiver had the crowd going wild “with his hold-breaking, tackle-busting, 73-yard touchdown explosion in the third quarter of a 44-21 rout of the Green Bay Packers in Sunday’s NFC Championship Game.” Julio finished with nine catches for 180 yards and two TDs, and this only eight days after re-aggravating the sprained toe on his left foot.

Oh, and we can’t forget the very first touchdown of the game caught with one hand by Mohammad Sanu (#13 FCIR) as he was falling down. What a play!

Packers Quarterback Aaron Rodgers (#13 FCIR) was understandably disappointed after the debilitating loss in which he sat out the 4th quarter. “We hurt ourselves with the missed field goal and another good drive down there and fumbled inside 10,” said Rodgers. “We had zero points in the first half and you’re not going to win many games like that.”

Clay Matthews of the Packers, one of the very few #5 FEIRs in the league, has recently suffered from a strained hamstring and didn’t seem his normal self on Sunday. It was questionable whether or not he would play at all.

Now it’s time to bring on drill sergeant Bill Belichick (#15 FCIL) and his New England Patriots. Both Ryan and Julio will definitely need to be on top of their game to overcome the most disciplined and carefully-managed team in football.